Who doesn’t like to have flowers in their garden? Whether they’re born on trees and shrubs, annuals or perennials we all want FLOWERS! If you’re not a snowbird that disappears for warm climates all winter you have to look at a flowerless garden.  Yes indeed, those big annual and perennial borders can be quite stark for our 5 months of winter. Evergreens, clothed in snow or not, can literally make all the difference in the view from your window.

Here are 10 especially hard-working conifers that will make your winter garden a lot easier on the eyes.

‘Jean’s Dilly’ Dwarf Alberta Spruce - If you already know the tight, predictable cone that is the “standard” Dwarf Alberta spruce it’s hard to imagine an even more dwarf selection, but there is! ‘Jean’s Dilly’ (pronounced “John”) has a slim profile that approaches only 3’ tall and 1’ wide after ten years. It’s naturally much denser, with even shorter green needles than Dwarf Alberta- and that’s saying something. So, if you’re using it in the garden rather than as a winter container subject (and many, many do consider it their plant of choice) give it at least a half day or more of direct sun while trying to keep from siting it directly against brick walls or in “hot box” areas where it’s going to be baked all summer. Absolutely no pruning – ever! 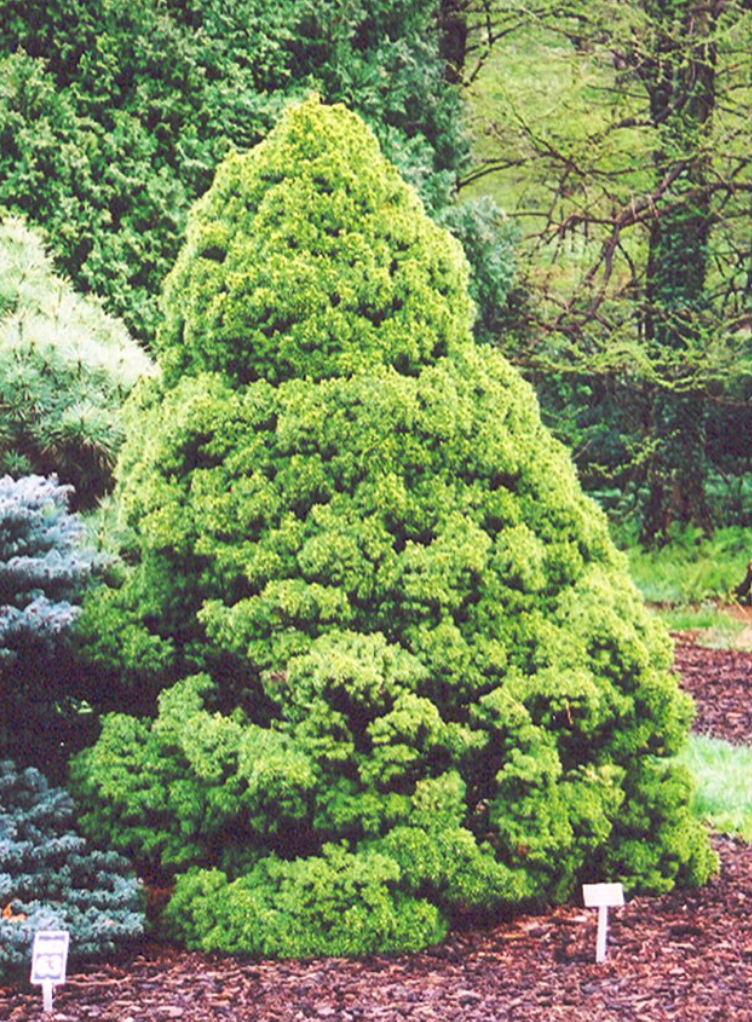 Technito® Arborvitae (like ‘Jean’s Dilly’ above) is a more dwarf, more compact selection of the already popular ‘Techny’ Arborvitae. Also best in full sun, Technito® matures at a slow moderate growth rate of 8-10’ tall and half as wide. It’s so dense it’s hard to imagine it ever really requiring pruning. Like most arborvitaes it’s at peak performance when planted in a moist location. Handsome, dark green foliage. The one to choose when you’re needing dense screening at “first floor” level. 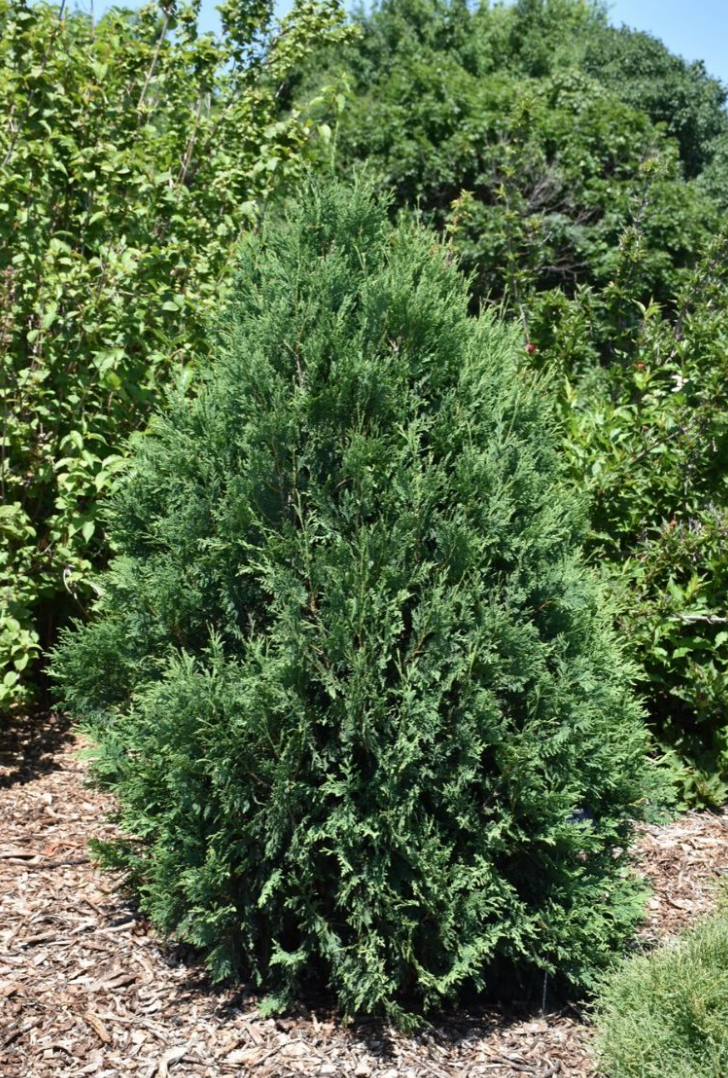 ‘DeGroot’s Spire’ Arborvitae is a “cut above” the rest of the field. Why? The tight, tufted foliage is definitely fern-like, combined with the naturally columnar silhouette, reminds me of the pictures I’ve seen of Mediterranean cypresses. It takes self-control to walk by this plant and not pet it like a puppy. Just visually tactile and appealing with bright green needles. It grows moderately fast to 15-20’ tall and 4-5’ wide. I seldom use arborvitae as specimen plants, but ‘DeGroot’s Spire’ can easily assume that role as well as being used for tall, narrow screening. Sun, moist soil, no maintenance – none. 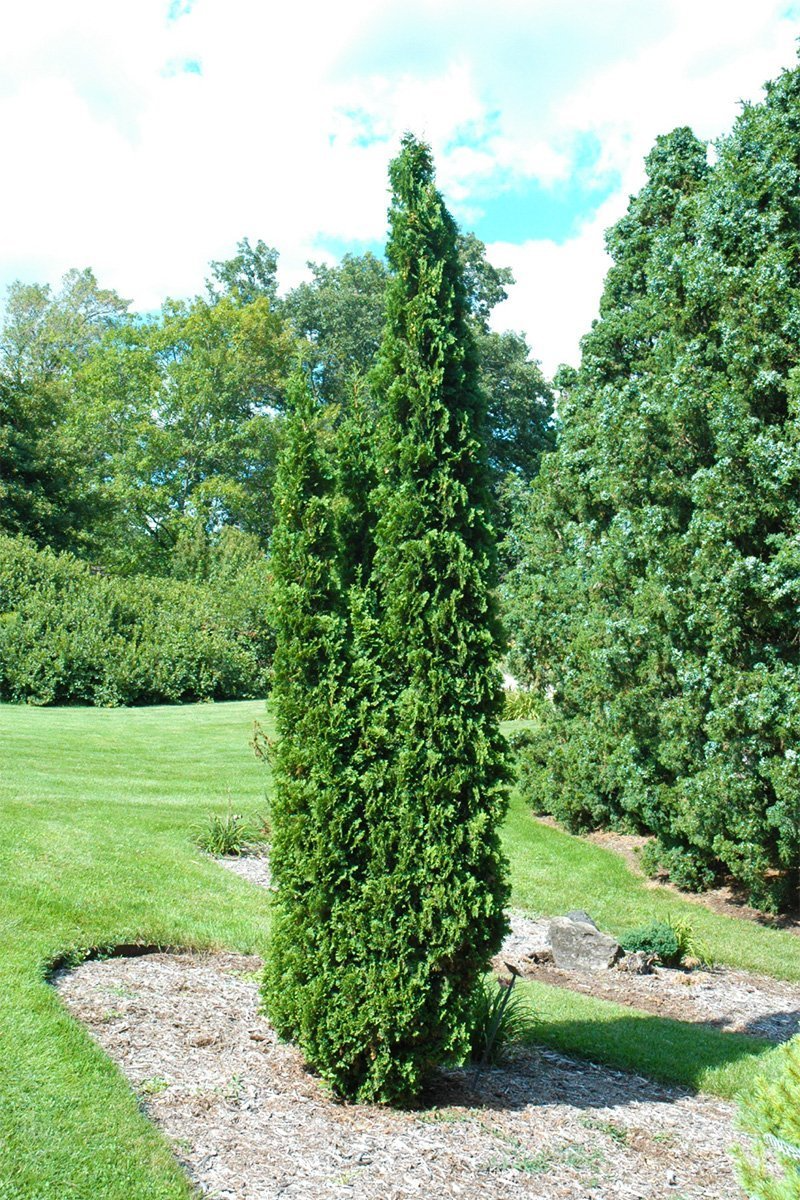 ‘Trautman’s’ Juniper  - delivers when space constraints dictate a pencil-point silhouette. As a single focal point, spaced apart like sentinels in odd-numbered groups, or for narrow screening this is a good solution growing to 15’ tall and 3-4’ wide. This has a decided blue-gray cast and fine texture. At least 5 hours of direct sun (more is better) is a must for maximum density. Genetically pre-programmed for as narrow an outline as you could possibly require. 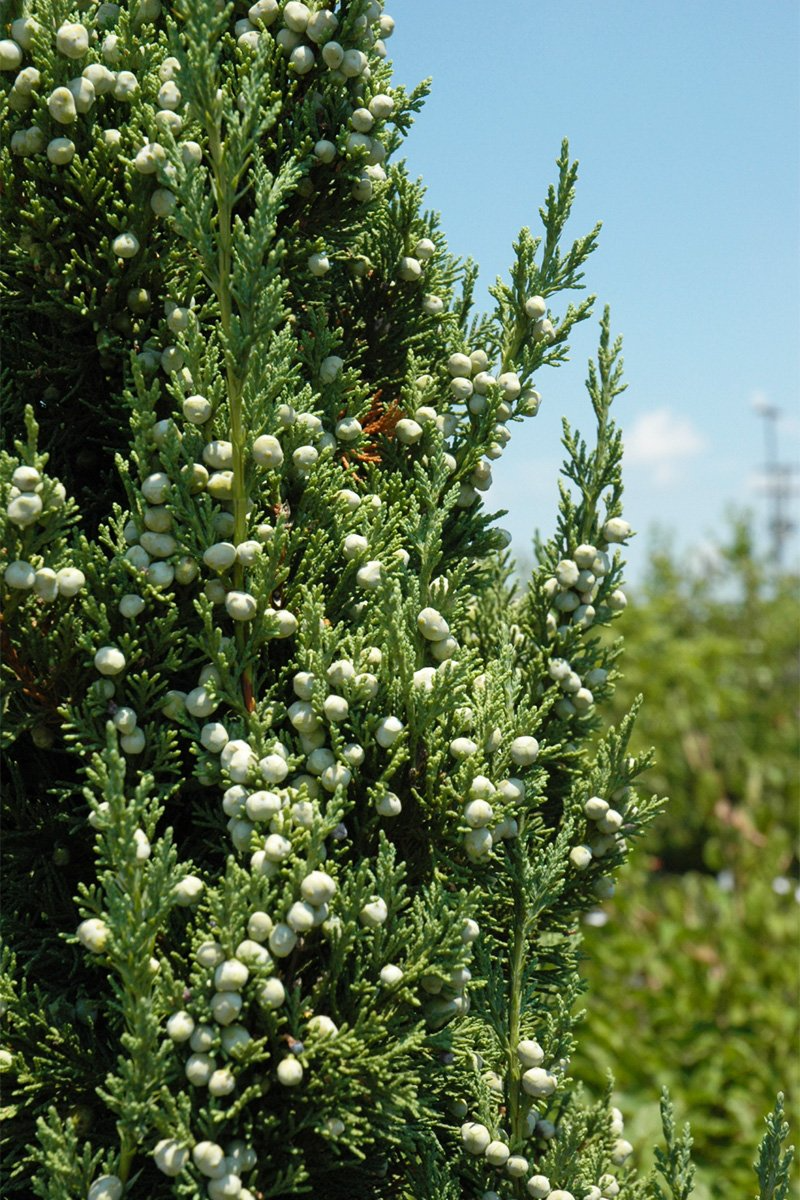 ‘Sea Green’ Juniper is a tidy, vase-shaped spreader that makes beautiful groupings with its naturally arching plume tips. The color is a singularly distinctive bright green that darkens in winter as a function of cold temperature. Unlike older varieties with sharp, prickly foliage that may be coloring your impression of junipers, ‘Sea Green’ is soft to the touch. 4-6’ tall, eventually 6-8’ wide. Sun-loving, as salt-tolerant as any juniper. Female variety means that with age you should expect gray-patina-ed berries. Hardy as can be.

'Dark Green Spreader' Yew is a great replacement for the time-tested ‘Densiformis’ Japanese spreading yew. ‘DGS’ is a slower grower (read less pruning) with really deep green coloration. Yews, like Hosta, are often unfairly maligned just because they’re widely known. Well, they’re widely grown because they’re very functional. And eventually at 3-4’ tall and 4-6’ wide ‘DGS’ makes both a nice under-the-windows mass planting as well as an attractive background for shorter annuals and perennials. They tolerate sun to considerable shade. Even in their first year in your landscape you’ll water these infrequently. They just don’t need it…. or like it.’ 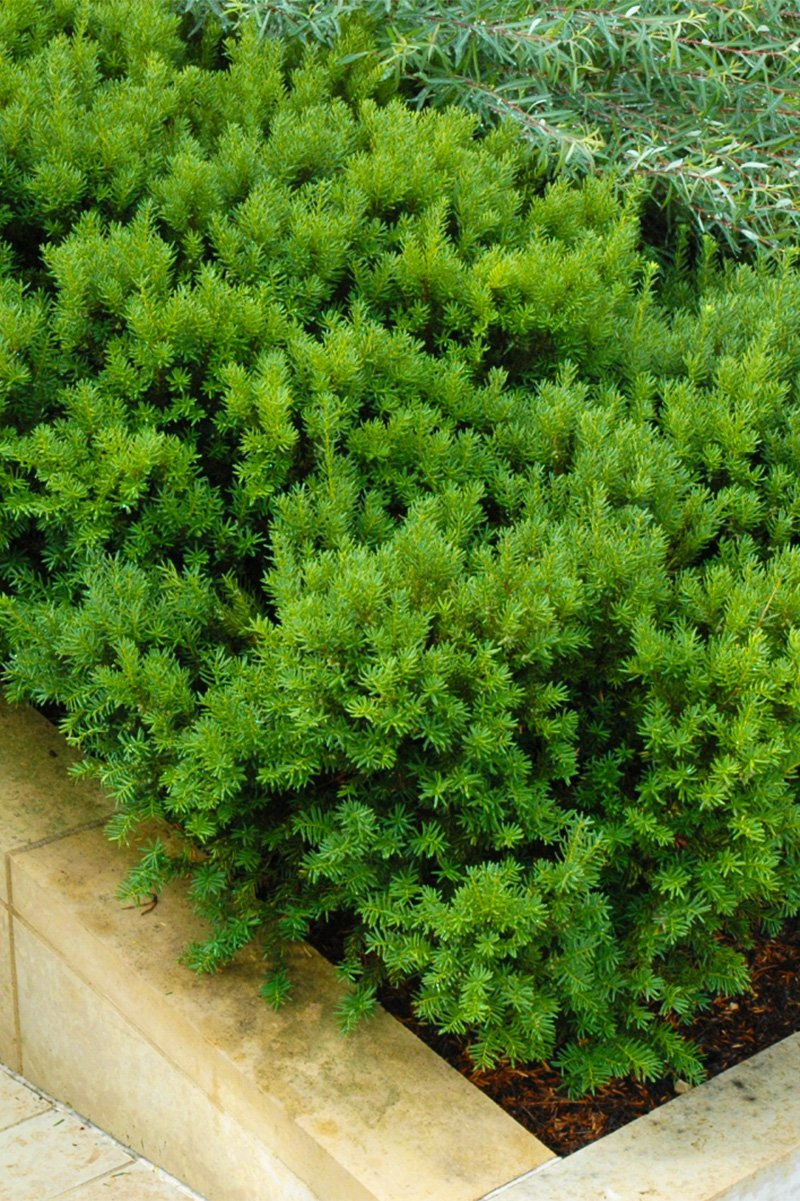 Dwarf Yellow Yew (Taxus cuspidata ‘Nana Aurescens) is a knockout for weeks in the spring when the marigold-colored new growth emerges. Talk about a strong color contrast- wow!  This dazzling coloration is strongest and lasts longest the more sun the plant is situated in, eventually softening to dark green. As mentioned above don’t place it low, boggy areas and don’t be tempted to water them several times a week, even if it’s dry. Think of yews as camels and you’ll have met their minimal water needs.

Emerald Spreader® Yew has very unique branching that might make you question whether it’s even a yew. The needles are arranged flat on the stem rather than being arranged all the way around like a bottlebrush. And then the branches are quite horizontal giving the plant the appearance of a tall, flat-topped ground cover. Shade-tolerant, maturing s-l-o-w-l-y 12-30” tall, 6’ or more wide. It’s a yew, so if you’ve been reading along you know it, too, needs well-drained to dry soil. I never anticipate much pruning with Emerald Spreader®. 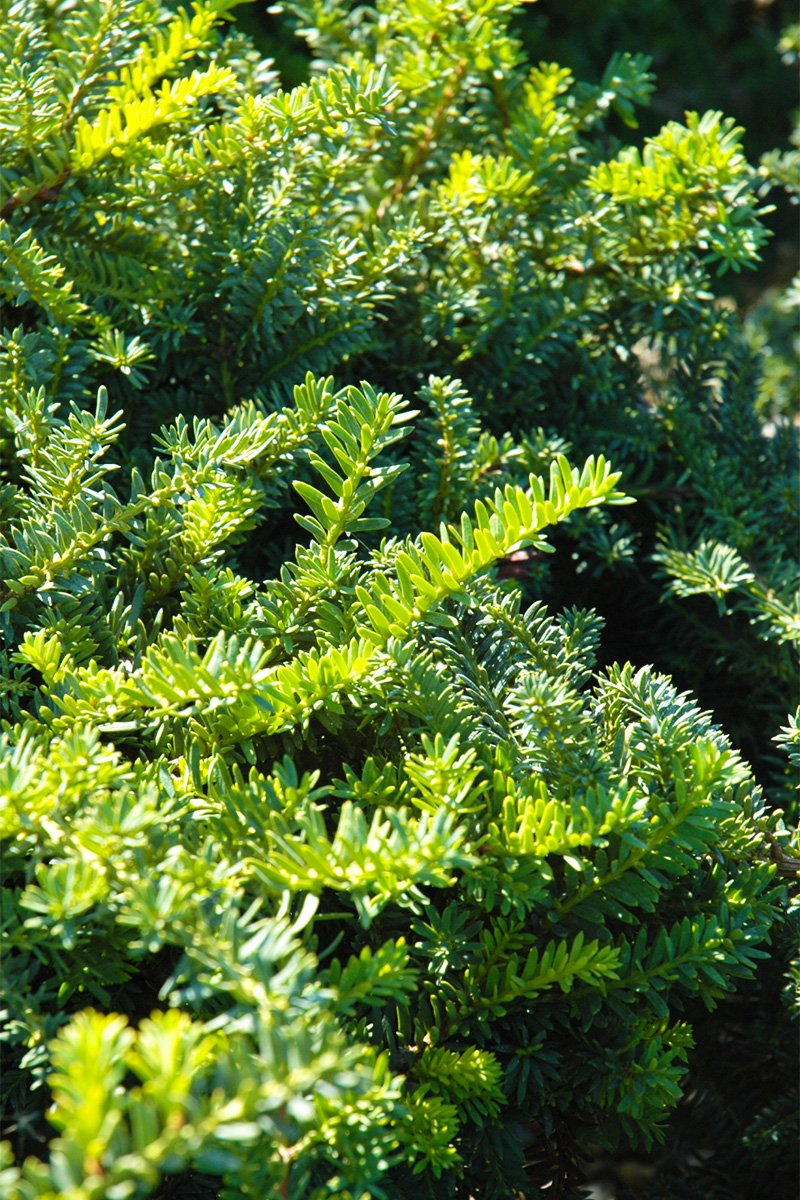 Norway Spruce - For those desirous of a rapid growing, large specimen-sized evergreen specimen or screen, look no further. Dark green, defined central-leadered tree that provides the expected conical spruce outline. Bottom third “droops” gracefully with age, middle third is horizontal and top third branches are upward-pointing. Not a small footprint at 25’ wide and 40-60’ tall. Grows and shows best in sun, but as most conifers go this one will tolerate partial shade. No pruning needed.

''Weeping Norway' Spruce - Weeping plants are inherently sculptural – and like all art, feelings about them are highly subjective- you either love ’em or hate ‘em! The height of most weeping evergreens is determined by how tall a stake they are “trained” to, and for how long when they’re young. They’ll tend to start cascading over whenever the support stake ends and that becomes their mature height. This tough-as-nails conifer will do well in sun or shade, and still look like a million bucks. It doesn’t get sparse in shade like most conifers. Weeping Norway is the definition of NO maintenance and winter snow only enhances its sculptural presence. 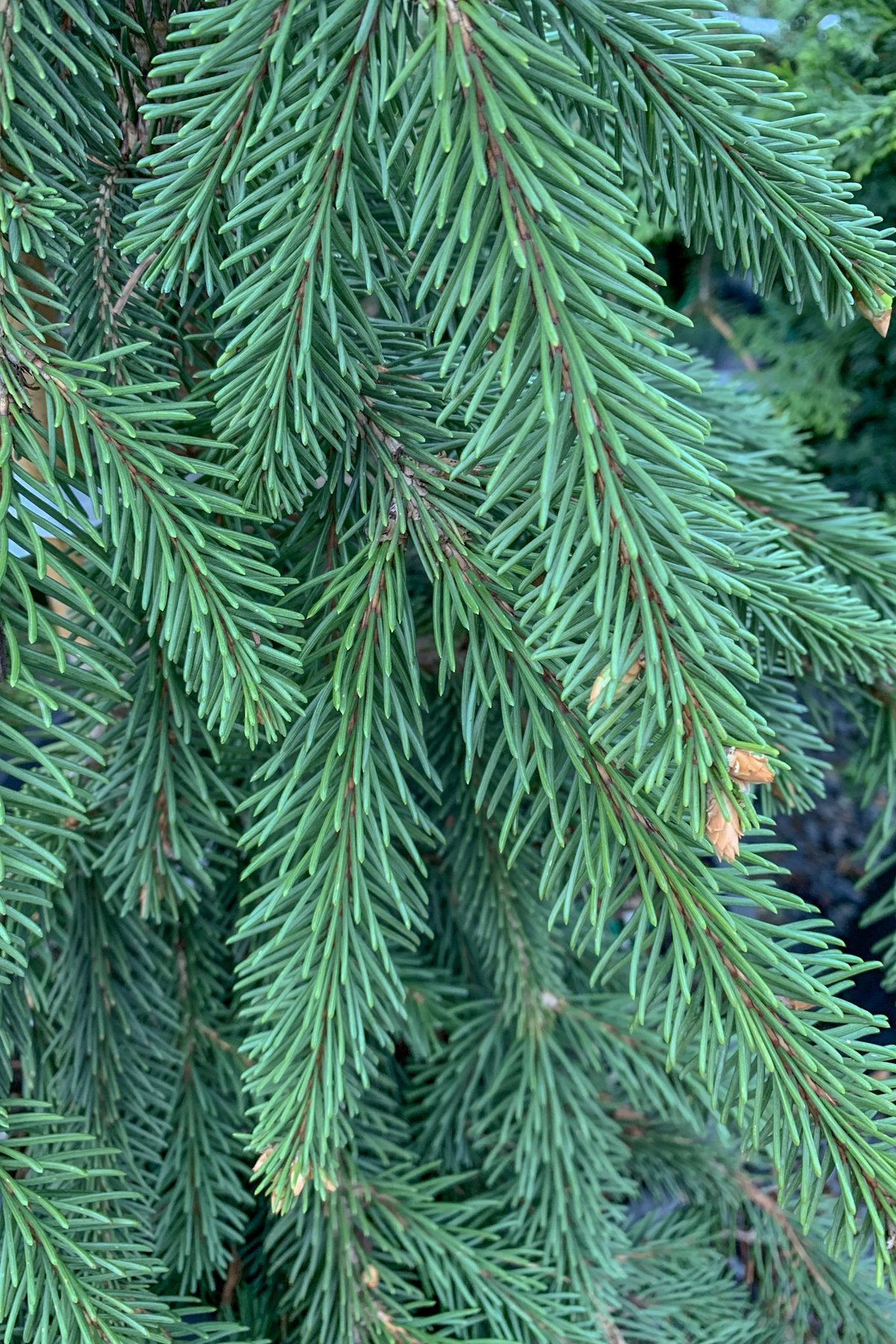 Any, or all of the above, will add presence and form to that flowerless winter garden. 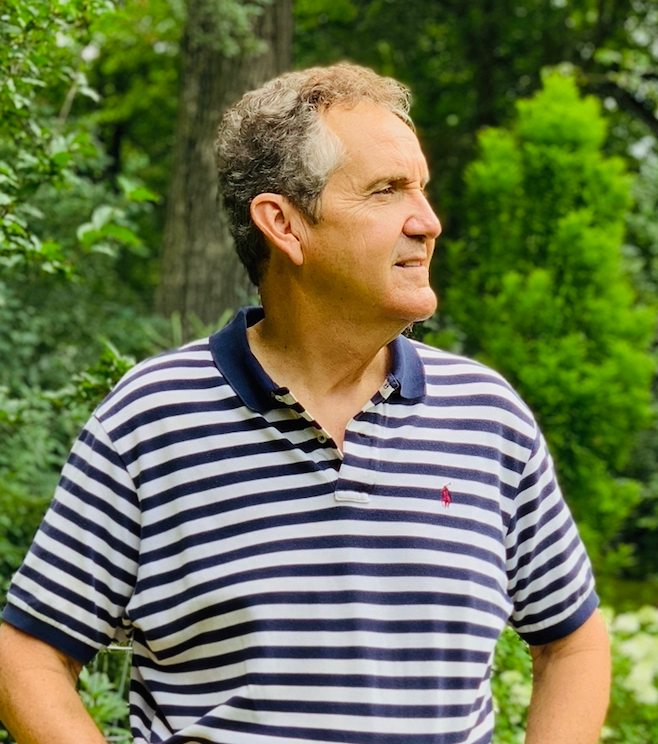